Many theories explaining the Harcourt Event exist, from the official (experimental high explosive German mine) to the bizarre (UFO abduction).

The Great Croatoan Working , a perverse and horrific rite, was allegedly performed by a disciple and, later, bitter rival of Aleister Crowley on the battlefields of World War One in an attempt to create a portal allowing elder entities entrance to Earth. Some occult conspiracy buffs claim this ritual to be responsible for the mysterious events on the Somme in 1916, resulting in the disappearance of the Pennine Fusiliers and the creation of the crater itself.

Today, 94 years later, as a result of the recent diplomatic and military leaks on the internet, information has been brought to light concerning


"mysterious rituals performed by elements of the United States military forces in Iraq".

Reports from Russia  suggest that the US Military may have taken advantage of the Iraq War to conduct secret occult research. They also state that:


"the Americans have constructed a nearly one kilometre circle around their massive excavation."

The diameter corresponds alarmingly to the size of the Harcourt Crater and raises grave concerns that they may have been attempting to replicate the Great Croatoan Working.

Linked to this are subsequent reports  of 'mass suicide' among US soldiers involved in "a rite to open an ancient portal or 'star gate'." Was it suicide, were they driven mad, or were they, in fact, blood sacrifices needed to power the Croatoan ritual itself?

Have the US Military been meddling in unholy attempts recreate the Working of one of Britain's most infamous occultists and reopen a portal to a place where 900 British Tommies were consigned over 90 years ago? And, if so, to what possible end?
Posted by Pat Kelleher at 18:24 1 comment:

Ninety four years ago today, the 13th Battalion of the Pennine Fusiliers vanished from the Somme leaving, in their wake, a great scar on the landscape.

This year, for the first time in living memory, there will be no WW1 veterans gathered at the memorial in the nearby town of St. Germaine or laying a wreath at the site of the Harcourt Crater to remember long fallen comrades, comrades who found themselves, as the Hepton Footage would have us believe, on another world.

Their legacy may yet exist on that nameless alien planet and it may be that "They shall not grow old as we who are left grow old" at least, that is, if the theory of Relativity holds sway.

But today in Broughtonthwaite, at 7.30am wreaths were laid at the foot of the war memorial before St Chads in memory of those who vanished this day, at that time, in 1916. 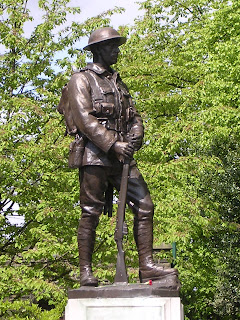 We will remember them.
Posted by Pat Kelleher at 08:05 No comments:

The War ground on and the rest of Britain moved on with it. The suffering of the families in Broughtonthwaite though, continued, with parents, wives  and relations petitioning the War Office for news on their lost ones. Not for them the relief or grief of scouring the newspapers for familiar names in the casualty lists or the lists of dead. A confirmation of death would be a blessing compared to the agony of not knowing.

However, the War Office was unable or unwilling to give an answer. The extraordinary circumstances surrounding the 13th Battalion elicited no special treatment from the bureaucrats. The relatives were dealt with in the same brisk, business-like manner as the families of tens of thousands of other soldiers. The men were simply listed as Missing. Not Dead, or Died of Wounds, or Killed in Action, just Missing. 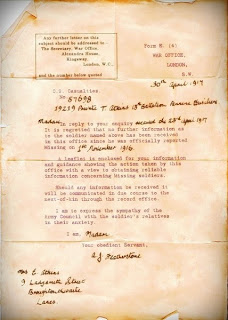 Reproduced courtesy of the Cooper family.

And that continued to be the official response until the Committee of Enquiry into the Harcourt Incident delivered its secret report. The men of the 13th Battalion were officially declared Dead in 1921 and the families of the Broughtonthwaite Mates had to take what little comfort they could in that.

The Battle of the Somme had dragged on throughout the summer of 1916 and, in its dying days, at twenty minutes past seven on the morning of 1st  November, nine hundred men of the 13th Battalion of the Pennine Fusiliers, a Pals Battalion known as the ‘Broughtonthwaite Mates’,  went over the top.

Their objective was to attack the entrenched German machine gun positions in Harcourt Wood. It meant crossing over quarter of a mile of No Man’s Land, up a gentle incline that recent autumn rains had turned into a lethal quagmire. It was to be the last large scale attack of the campaign. In a bid to finally take and hold the Harcourt sector of the German line that had resisted the British advance all summer, the 13th Battalion marched resolutely into the gas cloud drifting across No Man’s Land to do their duty for King and Country.

The northern mill town of Broughtonthwaite, where the regiment had its barracks, was understandably devastated when the tragedy was reported by the local newspaper. 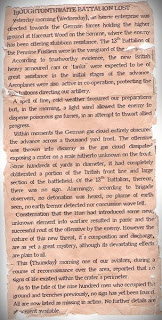 As the town mourned its heavy losses, the relatives pressed for answers from a reticent Government.  Philanthropist and magnate, George Everson of Everson's Brewery, twice mayor of Broughtonthwaite and whose son, Second Lieutenant  James Charles Everson, was among the missing, brought considerable pressure to bear on the government.

In response, the War Office claimed that the Germans had set off mines dug deep below the British positions, packed with ‘an experimental explosive’. However eye witnesses at the time, as the cutting above illustrates,  claimed to hear no explosion that could account for such a catastrophic event.

It didn’t take long for rumours to spring up concerning the extraordinary circumstances of the Pennines’ disappearance. Some ascribed supernatural explanations. Others talked of Bosche Zeppelins and death rays.

Questions were asked in Parliament. The government stuck to its original statement, seeking to turn the tragedy into propaganda while secretly setting up a Committee of Enquiry to investigate the incident. Its eventual findings would be sealed for an unprecedented one hundred and fifty years. The families and descendants of those lost will have to wait until the opening of the records in 2069 to discover the official verdict.
Posted by Pat Kelleher at 10:25 No comments:

Along with the Angel of Mons and the Phantom Bowmen, the Harcourt Crater is one of the enduring myths of the First World War when, on the 1st November 1916, some 900 men of the 13th Battalion of the Pennine Fusiliers vanished from the face of the Earth.

Although many claims on the truth have been made, the Harcourt Crater and disappearance of the ‘Broughtonthwaite Mates’ have never been satisfactorily explained and with the deaths in recent years of the last surviving World War One veterans, there is now no one alive who can remember, first hand, the tragedy of All Saint’s Day, 1916.

However the publication of a new book, No Man's World: Black Hand Gang from Abaddon Books, has prompted a resurgence of interest in the ninety-four year old mystery.

Was there any truth to government claims at the time that the crater was the result of experimental explosives? Or was it, as some believe, the work of supernatural forces? Did Nikola Tesla appear before the secretive government Committee of Enquiry into the Harcourt Event and, if so, why?

For those interested in seeking further information about the Harcourt mystery and the true fate of the Broughtonthwaite Mates, your search continues here.
Posted by Pat Kelleher at 16:54 No comments: