During the First World War, technology advanced at a great pace with machines and devices rapidly becoming obsolete as they were superseded by events or enemy technology.

The War Office was always open to new ideas for weapons that might give them an edge over the German army and many periodicals of the time were enthusiastically filled such with proposals, although a great many proved impractical.

There were persistent rumours that Nikolai Tesla was working on a death ray and, in England, Harry Grindell Matthews claimed to have invented a remote-controlled anti-Zeppelin weapon, for which the Admiralty allegedly paid him £25,000. After the war, in 1923 he, too, also claimed to have developed a Death Ray.

In No Man's World, the Pennine Fusiliers manage to supplement their diminishing supply of ammunition by adapting alien Chatt technology to create a rechargeable electrical weapon of their own. It was partly inspired by a proposed real world application. The June 1917 issue of The Electrical Experimenter featured an article describing an electrically-charged weapon for use again the Hun on the battlefield. 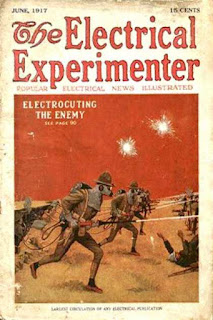 Adapting the German idea of the flammenwerfer, or flame-thrower, the idea revolved around  electrifying pressurised salt water or a sulphuric acid solution. The liquid tank carried by the soldier was attached by cables to a generator and transformer in the trenches that would deliver up to 15,000 volts. It was suggested that the rubber-clad operator could then fire a stream of electrified water up to 100 feet, stunning or killing the enemy. Needless to say the whole enterprise was ill-conceived, not to mention dangerous, and was never actually put into service. 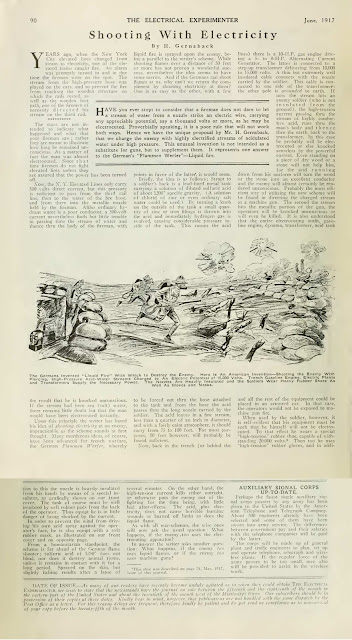